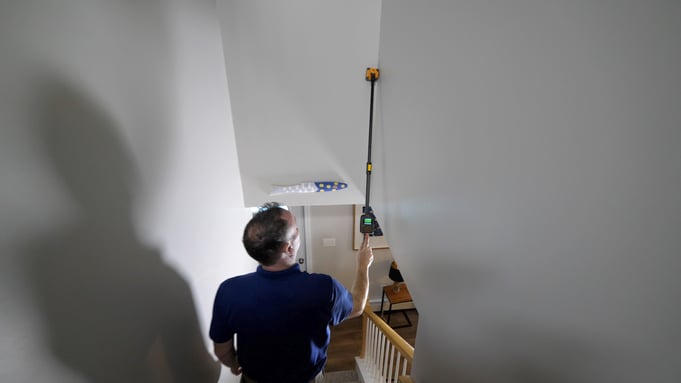 There’s hardly a profession that doesn’t have its risks to a worker’s health and safety.

Conducting moisture surveys during home inspections and flood damage restoration are no exceptions.

Moisture can create serious issues within a space. And the spaces in which moisture readings are taken are not without their hazards, too.

Being mindful of the common obstacles to health and safety during moisture testing helps you work efficiently with no major issues.

Locating areas of concern with moisture isn’t always a risk-free venture. When conducting a moisture survey, there are several health and safety hazards to be mindful of, including:

While ladders are part of everyday life as an inspector, they aren’t without their risks.

Work-related injuries from ladder falls have remained on the Occupational Safety and Health Administration’s top 10 most-cited violations for the last decade. It’s estimated more than 100,000 people are injured by falling off a ladder each year.

Among the most common causes for ladder related injuries are:

Sometimes taking a moisture reading requires navigating around large objects that, by appearances, seem stable. When bumped or moved, heavy objects -- such as a shelving unit that’s not fastened down or a stack of boxes -- can fall over and injure those in the way.

Taking moisture readings in a confined space, such as a partial attic, gets tiring after a short time. You’re often forced to crouch or crawl once inside, causing muscle strain and fatigue. Not to mention, working in a confined space is time consuming.

If there’s one thing molds love, it’s moisture. In fact, they thrive in it. That’s why during home restoration inspections and building surveys, it’s not uncommon to find stachybotrys (black mold) or alternaria in damp areas. It’s especially present in buildings with flood damage.

Where there’s a moisture issue, there’s also a chance for exposure to stagnant -- or standing -- water.

Left sitting for long periods of time, untreated stagnant water may harbor dangerous biofilms, which are habitats for dangerous diseases and pathogens such as:

When encountering standing water during a moisture survey, the best practice is to stay as far away as possible and thoroughly disinfect objects that come in contact with it.

As in any profession, the best way to stay safe while on the job is to be aware of the hazards you may encounter. Knowledge is power.

The next best thing is using the equipment and tools that keep you safe. A moisture meter that’s designed to work with the user allows you to work efficiently without compromising safety.

With its extendable handle that reaches up to 48” (112 cm), Protimeter’s ReachMaster Pro helps you navigate around these health and safety hazards.

Learn more about the ReachMaster Pro by contacting one of our distributors near you!

There’s something to be said for understanding the fundamentals of what you’re doing.

There are some tools that seem like they’re just meant to be together.