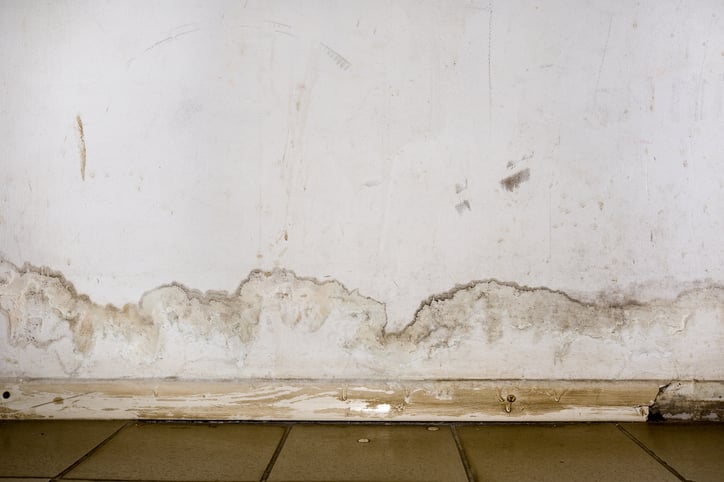 (Editor's Note: This is the first installment of a series that examines building materials and the moisture meters needed for accurate measurements)

Walk into almost any building and it’s nearly impossible to not find drywall.

One of the most common building materials, drywall – a.k.a. sheetrock or gypsum board – is a standard in modern construction, replacing plaster.

Despite its qualities for construction and fire protection, drywall does have a natural enemy of sorts: moisture.

During a flood and water damage inspection, drywall is one of the first places to check. In most cases, if there’s excessive moisture, drywall makes it obvious. What’s more, a moisture issue with drywall requires a much deeper investigation into the area covered by it.

The best moisture meter for drywall isn’t the one that’s available. Rather, it’s one that meets the demands of the inspection and delivers accurate results.

Like wood, drywall – which is made of gypsum, paper, and various additives – is hygroscopic. If there’s high humidity n the ambient environment or flood water makes direct contact, the porous building material will absorb it.

Outside of a flood situation, drywall can act as a litmus test of sorts for a moisture issue. When affected by moisture – say, excessive water vapor coming through a concrete floor – drywall displays signs of damage, such as:

Regardless of the duration or intensity of exposure to moisture, drywall showing evidence of moisture damage is a telltale sign of a much larger issue and requires further investigation.

The Best Moisture Meter for Drywall

As with any moisture inspection, your sheetrock moisture meter choices come down to two options: a pin-type meter or a pinless moisture meter.

What’s the best moisture meter for drywall? That depends largely on the intent of the survey.

If you’re looking to determine the moisture content of an area of drywall (which most surveys are), a professional-grade pin-type meter with the ability to use accessories is your #1 choice.

By itself, a pin-type meter gives an inspector data on how inundated by moisture a material is, displaying moisture content values as a percentage. A pin-type meter does so by measuring electrical resistance between its probes.  The more moisture present in the drywall will create elevated readings on the meter.

With additional accessories, such as a deep wall probe or baseboard probe, the meter has enhanced functionality and can take other key readings to understand moisture presence.

Though serving a different purpose, a pinless moisture meter does have a place in surveying drywall for moisture. Rather than measure moisture content, a non-invasive meter helps an inspector zero in on moisture’s location in a space or even the source of the issue. A pinless meter is usually used during the initial part of a survey when trying to determine how widespread a moisture issue is. Its readings are always candidates for verification by a pin-type meter.

Pro Tip: Lighten your load with a dual-function or all-in-one moisture meter. Both device types boast the functionality of a pinless and pin-type meter. Our SurveyMaster does the work of both meter types. Check it out here: 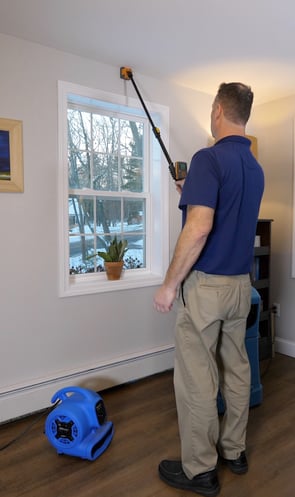 Against most other building materials, drywall moisture inspections don’t require any specialized training or considerations.

When taking measurements with a pin-type meter, simply touch the device’s probes to the surface of a drywall sheet. Using a professional moisture meter, you should have readings within a few seconds.  Be sure to not force the meter’s probes beneath the surface – not only will you get inaccurate readings, but you also run the risk of damaging the meter.

In areas where there’s excessive moisture, a thorough inspection also involves checking behind drywall. Oftentimes, wall cavities have insulation – which, like drywall, holds moisture. When damp, moisture-affected insulation becomes a breeding ground of sorts for mold and fungus. A lack of insulation is also a potential problem for a property owner, as temperature differences can create conditions for condensation.

As a material that’s in almost every building, drywall moisture measurements are part of almost every post-flood and -water damage survey.

The best moisture meter for drywall helps you easily go beyond surface level to determine moisture presence with precision and accuracy.

Made for Post-Flood Inspections: Restoration Kit

Check out our Restoration Kit and how it helps you consolidate your toolbox.

When something seems off with your car.